Think carefully about how you will compose (or frame) your shots — this includes interviews, stand-ups, and b-roll. A basic principle for composing shots is called the “rule of thirds.” It’s a simple concept and rather intuitive. You may already be applying this rule when you take photographs of friends and family. Here’s a nice explanation from Vimeo:

Let’s use the rule of thirds to dissect one frame of video. This is from an interview for a news PKG. The shot is a standard close-up, also known as a “talking head.” We see both shoulders and the subject’s whole head, with a little bit of head room above.

Now we’ll put the grid over the frame to see how the subject’s face lines up. 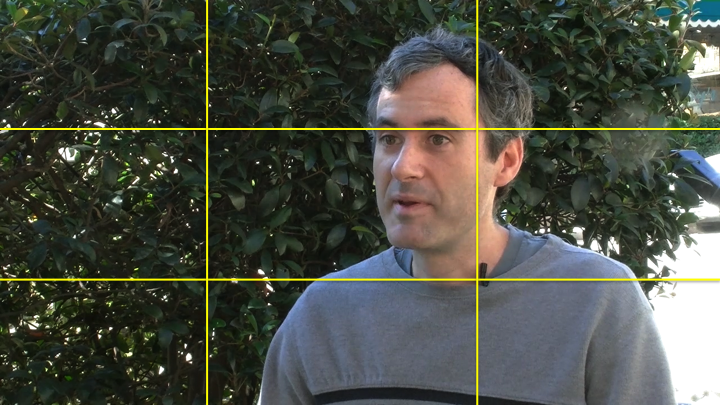 Notice that his eyes are along the top horizontal line. His eyes are also tucked inside the upper right corner of the middle box, so his nose and mouth fall within that central portion of the frame.

Here’s the frame again, with some additional notes about composition. When shooting news interviews, compose the shot so that the subject’s face is the most prominent thing in the frame. This technique draws the viewer into the eyes of the subject. Notice also that the subject is looking just off camera at the reporter. This allows the subject to maintain eye contact with the reporter. You want the interview to look as natural and conversational as possible. There’s more room on the left side of the frame, giving the subject what we call “look room.” Some folks also call it “nose room.” 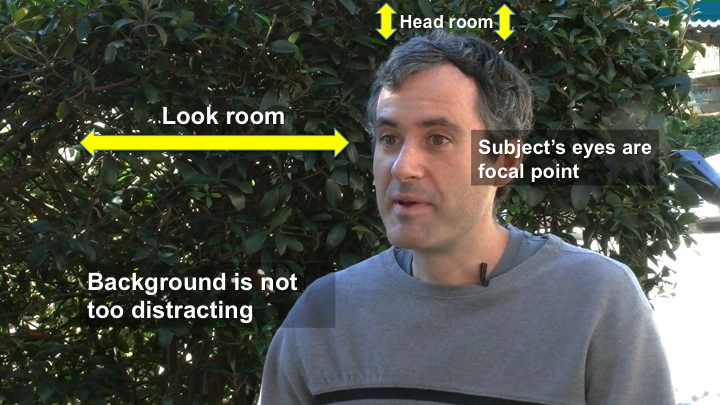 Putting it all together
Now let’s see some professional examples of shot composition for interviews and b-roll.

Narrated PKGs:
Here’s a great story from Boyd Huppert of KARE-TV in Minneapolis. It’s about a young boy who is a prodigy at crocheting! Notice how still and steady the camera is on most every shot. The framing is also meticulous. Some interviews are static, while others are active, allowing the character to move naturally about the house.

Here’s another story. This one is about adaptive sports, which aired on WXIA-TV in Atlanta a few years ago. Watch it several times. Pay attention to the visual elements and shot composition. Then watch it again and focus on the audio elements. By the way, this was produced by a solo video journalist. The reporter shot, wrote and edited the story.

Nat PKG (short for “natural sound PKG”): Here’s a story from WNBC-TV in New York City. This does not have a reporter’s narration track. The characters tell the story in their own words, through their soundbites. This style is more like a mini documentary. Take note of the b-roll sequences of the guitar player. And listen closely to the nat sound — note how it is used to establish the location and punctuate each scene. This story was shot and edited within 48 hours.

Football snacks are still undefeated
We’re celebrating #juneteenth with the glorious food and hospitality of @theplatesale and cookbook author @foodculturist Thank you for an amazing afternoon!
We’re celebrating #pridemonth with Athens first ever pride parade downtown!
A few more scenes from Montreal before we leave